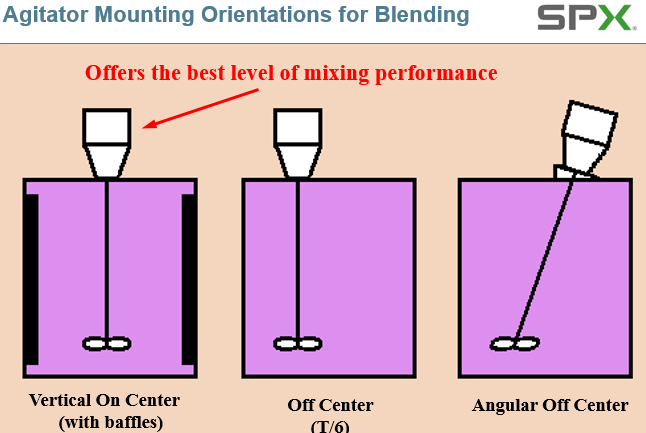 Posted at 21:04h in Mixers by Jonathan Greene

Vertical On Center with baffles:

This is considered as the most optimal and preferred mixer orientation.  The baffles serve as flow directing vanes to develop the fluid patterns in the tank into a “top to bottom” rolling motion and turnover the fluid contents of the vessel.   This circulation of flow created by the baffles offers the most optimum mixing for achieving good blend times and suspension of solids.   The standard baffle configuration for most vertical tanks is 4 baffles with a baffle width of 1/12 of the tank diameter.  For applications requiring the suspension of solid particles, a vertical tank with baffles is recommended.  Without baffles, a swirling pattern would form in the tank causing poor fluid interaction, inconsistency of product throughout the tank, and much longer blend times.  This swirling motion can lead to a vortexing(i.e. funnel) that introduces air into the tank.  This short circuits the flow pattern and can also be a mechanical detriment to the mixer.

Vertical off Center with no Baffles:

See the middle picture above.  This should only be used as an alternative in situations when baffles cannot be used in the tank and only for cases of very mild blending. It is not as efficient and can also lead to fluids swirling and vortexing if the power levels are too high.  Blend times can be 2-3 times longer than tanks that are fully baffled. This is also not recommended for solids suspension applications as you will not get the “top to bottom” fluid turnover needed.  Mechanical forces can also be 80-100% higher than a mixer in a fully baffled tank.

Angular Off center with no baffles:

This is most commonly used for smaller mixers(i.e. portable mixer product line) whereby the mixer is either clamped to the tank wall or mounted at an angle to achieve the “top to bottom” turnover of the tank contents without baffles.  This is typically limited to portables up to 5 Hp.  The mixer is set at a vertical angle of 10 degrees if the tank aspect ratio(i.e. overall height to tank diameter ratio) is less than 1.5.  If that ratio is greater than 1.5 and less than 2, the suggested mounting angle is 7 degrees.  The shaft and impeller can also be positioned as shown below depending if the customer desires different mixer flow patterns.  Position 1 is the most frequently used to optimize turnover of tank contents.  Angular off-center mounting should be limited to blending applications.  If solids suspension of particles is required you should use a vertical on center mounting with baffles.

The choice will depend on the application, mounting limitations, and whether you can install baffles in your tank.